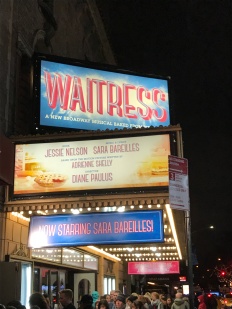 So whilst in NYC for a few days myself and my girlfriend went to see Waitress at the Brooks Atkinson Theatre. The main reason for this being the theatre was 50 metres away from our hotel (honesty being the best policy I believe). That aside, it also had an extra bonus in that Sara Bareilles – the composer & lyricist was appearing as Jenna.

If you don’t know much about Waitress, it was a quirky little film from 2007, written by the late  Adrienne Shelly and starred Keri Russell in the lead role. It was bought by Fox Searchlight pictures for about $6 million, and went on to make $16 million, winning plaudits along the way.

It tells the story of a young woman trapped in a little town, a loveless marriage and a dead-end job as a waitress, who falls into the next trap of an unwanted pregnancy. Escape beckons when she falls in love with her gynaecologist, but he hesitates to leave his practice and his wife.

Staging wise it’s like nothing I’ve seen before. There’s not the effects like Wicked, or Frozen, but in its own way, the Brooks Atkinson Theatre is a small venue and that adds to the cosiness of the musical. It’s a little piece of small town USA in the big city.

Musically, it feels right – with lyrics written and performed by Sara Bareilles. It has a country contemporary feel that oozes emotion with each note. Till seeing it, I’d not heard any of the score, but once was enough and it left me wanting more – so much so, upon arriving back in the UK I bought the original cast album and Sara’s album of songs from the musical.

As a lead character, Sara Bareilles is able to inhabit the role quite well – considering she wrote the music and lyrics – there were moments that left me speechless – “She used to be mine” certainly has left a lasting impression.

NaTasha Yvette Williams as Becky (a role once taken by Keala Settle – her that now is part of The Greatest Showman), together with Caitlin Houlahan as Dawn provide the perfect harmony and backing to the main story, and both excel with their own story arcs.

Drew Gehling as Dr Pomatter plays Jenna’s love interest with brilliant comic timing, as does Christopher Fitzgerald as Ogie for Dawn. His “Never ever getting rid of me” performance ranks as one of my favourite musical theatre moments – ever!

My one slight problem with the production lays in the fact, will it transfer across the pond to the UK? The musical style is intrinsically American country – so would audiences in the UK buy into it? I don’t see why it shouldn’t work – Leann Rimes, Shania Twain, and Taylor Swift are all country music based – and they’ve done quite well over here.

I hope it does, because I’d say you need to see it. If you’re a fan of Sara Bareilles, the film Waitress, or a beautifully written musical that will send you away with a song in your heart, and the taste of pie in your belly, this is for you. 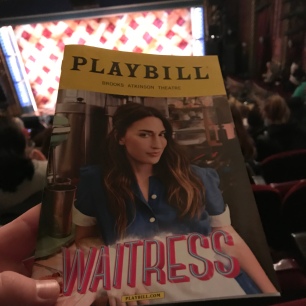